In Wasteland 3, if you chose a specific path to deal with Faran Brygo’s Little Vegas, you’d be treated to a group of kids assembled to play a tabletop game they called ‘Robots & Rangers.’ Though not fleshed out within Wasteland 3, the general idea here was to show that tabletop gaming still survives even in the broken world of Wasteland. 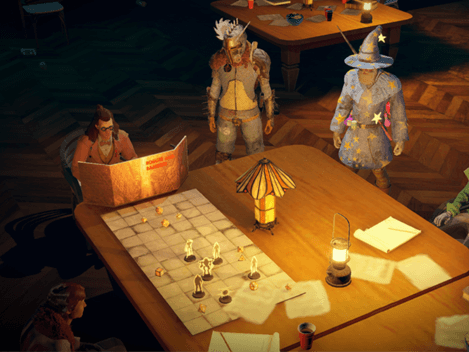 Of the many active members of the Wasteland 3 community, one of the more helpful has been Jim Sorenson. Both a super-fan of the franchise and an accomplished writer in his own right, Jim has been a regular presence in the Wasteland social channels, offering assistance and strategic advice to new players there. He's also responsible for creating a fleshed-out (and officially unofficial) version of the Robots & Rangers tabletop ruleset.

Not long after Jim began to share his drafts of the game rules with the community did our devs start to poke around in them and consider when might be an appropriate time to dig in themselves. Well, that time is now upon us, and we’re happy to be able to share this endeavor with Jim as well as the community at large.

First though, a few words with the author of the aforementioned Robots & Rangers ruleset:

inXile: Howdy Jim, tell us a bit about yourself!

Jim: Howdy! I'm a big sci-fi nut, have been ever since I was a kid. It all started over a misunderstanding. You see, when I was about 5 my parents told me that cartoons weren't real. This wasn't a shocker even to a very small kiddo, but it did lead me to an understandable logical fallacy. See, if cartoons WEREN'T real, I took it to mean that live-action shows WERE real. So when I caught my mom watching TV in the basement and I asked "what's that" and she said "Star Trek" and I asked "what's going on" and she said "well Captain Kirk is exploring the galaxy in the USS Enterprise and they've just beamed down to a planet to explore" my mind was BLOWN! The misunderstanding was soon corrected but the damage was done.

I never really fell out of love with the genre. Star Wars was a big hit, with R2-D2 being my favorite character. (Easily the most competent of the bunch.) My love of robots led me to Transformers, and to this day I make my living writing books and stories and articles about Robots in Disguise. In 1988, at the age of 12, I discovered Wasteland, and boy oh boy did I love the fictional Arizona of 2087.

inXile: What got you into roleplaying games, and when did you start?

Jim: Dungeons and Dragons! It had an allure in the 80s and I begged my parents to buy me the basic set. At first, I played sporadically, with some older kids and at conventions, but by high school, I'd managed to find/build a regular group, and off we went.

inXile: Have you had a hand at drafting any other games?

Jim: The AllSpark Almanac is a series of guidebooks I wrote for the Transformers: Animated television series. In volume 2, I wanted to tell the history of the Great War between the Autobots and Decepticons that had taken place millions of years before the start of the show. The conceit of this particular series of books was that everything was done from a diegetic perspective, found documents from in the universe. I wound up designing The Great War game, borrowing a bit from Life. It's a totally playable board game with some interesting mechanics, and I spent far longer than I probably should have making sure that all the math balanced so the game was fair. 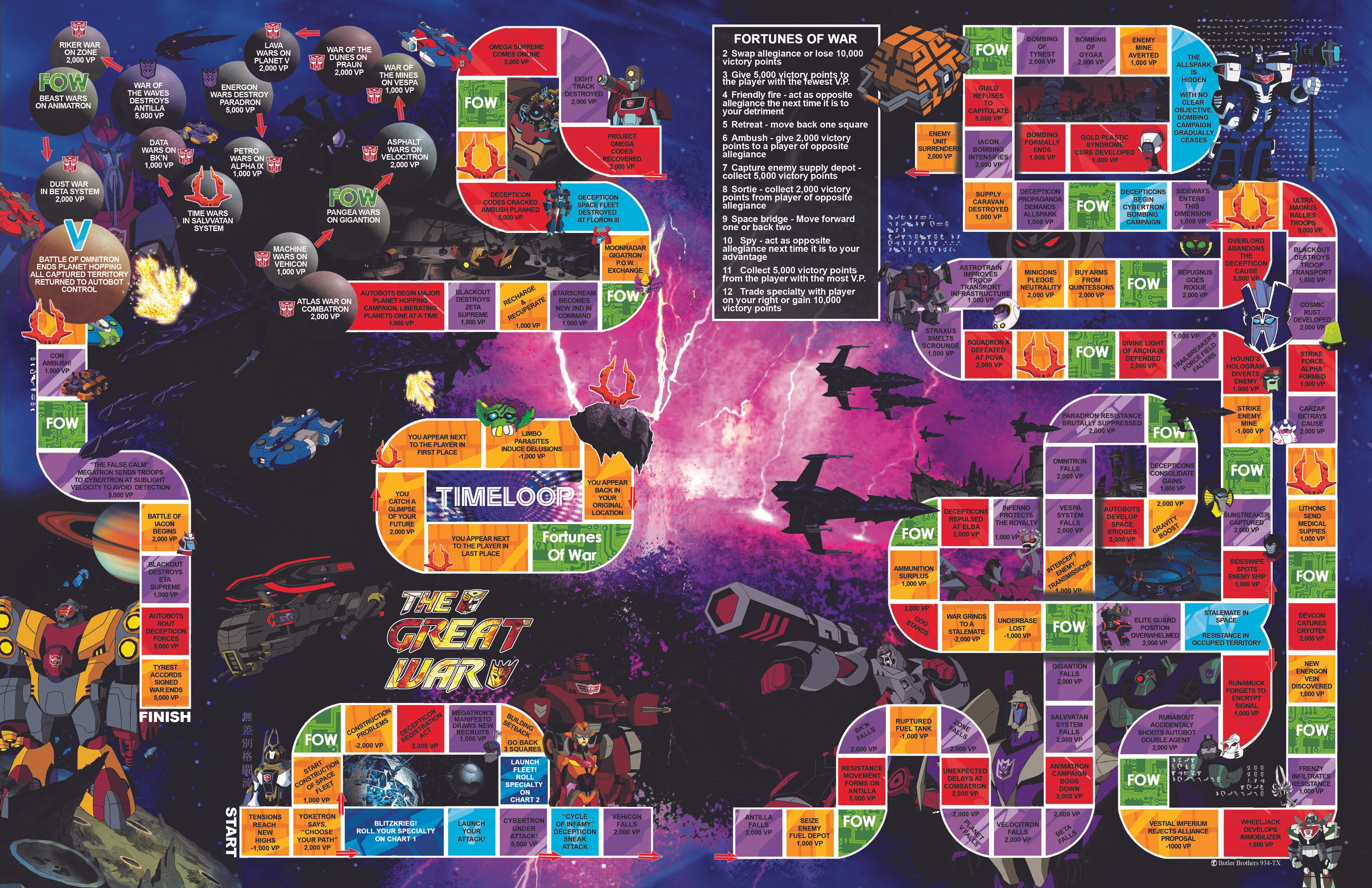 inXile: What’s something about Robots & Rangers that you think sets it apart from other tabletop RPG games?

Jim: The tone. I hewed as closely as possible to the amazing awesome irreverence of the Wasteland franchise. I hope that reading the rulebook makes people genuinely laugh out loud a few times.

I also leaned heavily into the die pool mechanics. Almost every stat is expressed as a die. Admittedly this isn't unique to R&R but it does set it apart. Lots of rolling multiple dice as a way to resolve various challenges.

inXile: Were there any particular challenges you faced while drafting the rules?

Jim: I put a lot of effort into Chapter 14, Factions & Missions. One of the best pieces of advice I received while working on the game was that I should build mechanics to encourage the kind of play that I want to see. To me, a core strength of the Wasteland franchise is the idea of choice. Ag Center or Highpool in Wasteland 2, team Angela or Team Patriarch in Wasteland 3, even Brygo or Fat Freddy way back in Wasteland 1. You can't make everybody happy in the Wasteland, and trying is a good way to get dead. By tying the idea of ranking up your guys to carrying out faction missions, I hope to encourage those kinds of choices. You can get in good with the Gippers but it's gonna piss off the Machine Commune; only one group can hold power in the Canyon of Titan, so you'd better choose between the Diamondbacks and the M.A.D. Monks.

inXile: Was there a moment or specific aspect of Wasteland 3 that heavily shaped the rules for Robots and Rangers?

Jim: I definitely played through the scene with the Hundred Family youth playing Robots & Rangers above the party in the abandoned casino more than a few times! But ultimately it was probably the Heads or Tails mission that really hammered home the idea of dilemma that I tried hard to capture mechanically.

inXile’s Ranger Team Foxtrot… or was it Bravo…

inXile: What advice would you have for a new group of players trying to build a level 1 Ranger team?

Jim: Just like in the core computer game, you want a wide variety of character archetypes. Different weapons have different advantages and disadvantages, so everyone should ideally specialize in a different form of combat. Try to focus on doing a couple of things really well so that the team can respond to a diverse array of challenges.

inXile: What’s your favorite setting or timeframe in the Wasteland lore to set a game, and why?

Jim: I gotta think Arizona. (Sorry, Saul.) While one could absolutely set a campaign in Colorado or California or even a totally new area to explore, Arizona is still the heart of the franchise. I grew up with the Rail Nomads and Darwin and Needles and Vegas. The period between 2 and 3 is ripe for exploration.

inXile: Do you have a favorite character in Wasteland?

Jim: Irwin John Finster is such a great figure in the lore. He was a ton of fun in 1, and it's great to see a knock-off of him in 3. Surely such a towering intellect can't have COMPLETELY vanished from the Earth.

Oh, and the Night Terror. Candy?

Jim: In a tabletop, I try to play characters with a strong bias towards action. You want to always be moving the plot forward, and a good storyteller (DM, SJ, whatever you want to call them) will be able to work with that. I tend to play impulsive characters; the headstrong barbarian in D&D, the hot-headed pilot in Battlestar Galactica, and the hard-smoking hard-drinking merc in Aliens. In Wasteland 3 I have my own custom build called The Pacifist who has no weapon skills but practically all the XP skills; I love the idea of having a guy who isn't shooting but nevertheless hella useful on the battlefield.

inXile: Do you have a favorite weapon or piece of tech?

Jim: Red Ryder all the way! I've written about it extensively and even made a music video celebrating it to the 1812 Overture. The Brainwave Destabilizer is also pretty boss.

inXile: There are a lot of callbacks to all three Wasteland games in Robots & Rangers. What's the most obscure one?

inXile: Thanks for all your support, Jim! Where can the community find the books you’ve written?

Without further ado, here’s our first Robots and Rangers session in all its glory.

“The Robots & Rangers teens were in George’s (Ziets) OG design for the Buzzkill quest, showing off a bit of life in apocalyptia for the youths of Colorado Springs. I was the Level Designer on all of Colorado Springs, and when I read that, I grabbed on to it, because it is one of those gags that’s, like, laser-focused, algorithm-targeted at my brain. I wanted to pull them into Ranger HQ for their continuing adventures. George wrote the tape, I did the writing for the teens in the Nightclub and RHQ, because I’m a jealous little dice goblin and didn’t want to let go of the joke 8D Nathan Long, of course, came through to make it better, and I believe he did the ads on the world map.”

“'Robots and Rangers' seems very true to life, where you show up to a social event only to lock yourself in a room with your friends to get another RPG session in. You not only see them play it inside Little Vegas, but you can invite them back to RHQ, where they continue the game session. You’re able to participate to a limited degree. To some degree, the Knight and Wizard outfits we released were inspired by the Robots and Rangers idea. We liked the idea of people in the post-apocalypse engaging in escapism by role-playing and LARPing.”

"I'm sad to report that after venturing on his own to the Wasteland, Dr. Fox encountered a hungry mutant giant kitten named Toby. His last thoughts were, 'Oh well, at least this is probably the cutest way to go.'" 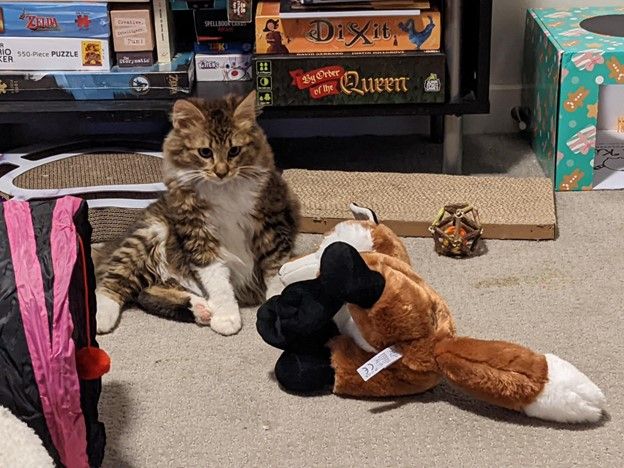